DON’T STOP WITH THANKSGIVING AND THE DECEMBER HOLIDAYS!

Posted on November 15, 2021 by Harley Rotbart
As we approach the meaningful and memorable family traditions surrounding Thanksgiving, I hope you’ll take this excerpt from the UPDATED AND EXPANDED edition of No Regrets Parenting to heart:
Russian scientist Ivan Pavlov became famous at the turn of the twentieth century for discovering and characterizing what he called the “conditioned reflex.” Simply put, if dogs became accustomed to hearing a bell ring immediately before he fed them, soon the dogs began to anticipate their meal, salivating at the sound of the bell before ever seeing or smelling the food.
That’s the way traditions begin; those dogs probably told their puppies to listen carefully for ringing bells because of the wonderful things that happen when that occurs. Traditions are conditioned reflexes. Throughout the UPDATED AND EXPANDED EDITION of No Regrets Parenting you will find suggestions for establishing family traditions that will trigger happy anticipation and leave lasting, cherished memories. Traditions around major holidays and minor holidays. Bedtime, bath time, and mealtime traditions; sports and hobby traditions; birthday and anniversary traditions; charitable and educational traditions. If your family’s traditions coincide with others’ observances, such as celebrating Thanksgiving, you can still make those traditions unique to your family with the personal nuances you add. Volunteering at the food bank on Thanksgiving morning, measuring and marking their heights on the door frame in the basement, Grandpa’s artistic carving of the turkey, and their uncle’s famous gravy are the traditions our kids salivated about when they were younger, and still do on their long plane rides home at the end of November each year. (By the way, our beloved late dog Lizzy confirmed Pavlov’s observations; when the carving knife turned on, cue the saliva, tail-wagging, and doggy squealing.)
But don’t limit your family’s traditions to the big and obvious events like Thanksgiving. Weekly taco nights, family book club and movie nights, pajama walks, ice cream sundaes on Sundays, backyard football during halftime of TV games, pancakes in Mom and Dad’s bed on weekends, leaf fights in the fall, walks to the sledding hill on the season’s first snow, Chinese food on anniversaries, Indian food for other big occasions, and balloons hanging from the ceiling around the breakfast table on birthday mornings. Be creative, even silly. Make a secret family noise together when you’re the only ones in the elevator. When you share a secret that “can’t leave this room,” everybody knows to reach up in the air and grab the imaginary tidbit before it can get away. Have a family comedy night or a talent show on each birthday. Make holiday cards from scratch. Celebrate major family events by writing personalized lyrics to an old song and karaoke-ing your new composition together.
There are two keys to establishing family traditions: repetition and anticipation. When you find something that brings out excitement and smiles in your kids, keep doing it. Not so often that it becomes mundane, but on a regular and predictable enough basis that it becomes an ingrained part of the family repertoire. And begin talking about the traditional event days ahead of time so by the time it finally happens, your kids are beside themselves with excitement. Anticipation can be as much fun as the tradition itself.
Excerpted from the UPDATED AND EXPANDED edition of “No Regrets Parenting” (a WONDERFUL gift for the holidays, for every parent and grandparent on your list!) 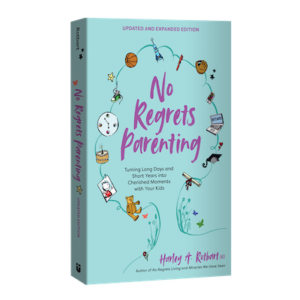