THE QUEEN OF FETCH 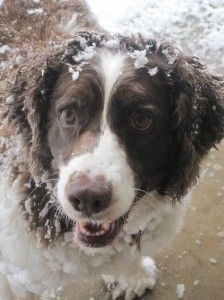 We put our beloved 15 year old Springer Spaniel to sleep last week. It was a great loss for us. Lizzy was our “4th child,” our 3 kids’ best friend, and the Queen of Fetch. We’d had her since she was a freckle-faced puppy. The breeder said that although Lizzy was one of the runts of the litter, she was the most energetic and playful of her siblings. That newborn assessment proved to be as accurate a predictor of future life as any I’ve seen a pediatrician give new parents in my 30+ years of practice with human babies.

Lizzy learned to fetch when she was a few months old. Looking back, I think we must have taught her, but she took to it so naturally that she redefined the genre and took it well beyond anything we could have designed. As a puppy, we would simply toss or kick the tennis ball a few feet; she would run for it and keep running, or roll around with the ball in her mouth. By the time she was a year old, she knew to bring the ball back to us; by age two, she would drop the ball at our feet, glare at it, and bark staccato woofs as if to say, “Again, Again, Again.” It’s not clear whether she was addressing the ball or the thrower. But until the next throw, she stood above the ball, screaming at it. When Lizzy was playing fetch, a special gleam in her eyes told us there’s nothing she would rather be doing. Most dogs love to be walked. The only way Lizzy would happily go for a walk is if we tossed the ball ahead of her as incentive.

Lizzy brought other nuances to fetch. When our kids were playing baseball with the neighbors in the backyard, she would drop the ball at the batter’s feet and scream at it until the batter threw it into the outfield. She would then fetch and bring it back to one of the fielders. If there were several kids gathered in the park or on the playground when she arrived, she would take turns dropping the ball at each child’s feet, never losing track of whose turn it was to throw to her. If one of the kids walked away, Lizzy would run after and drop the ball at his feet as if to say, “Where are you going, we’re still playing!”  Lizzy helped legions of kids lose their fear of dogs. If a child was a little worried about picking up a tennis ball with a loudly barking dog hovering over it, he or she quickly learned that Lizzy would never hurt anyone, but would also not stop barking until the child she anointed played with her. She had playdates with other dogs whom she also taught fetch. She was patient with them only for so long. Sometimes a slow-learner thought the ball was meant to be carried and not dropped. After a few minutes tilting her head to watch what the heck other dog was doing, Lizzy barked at her playmate until it surrendered the ball. Labradors were the worst. They could stuff 3 tennis balls in their mouths at once without dropping one – Lizzy couldn’t understand the point of that at all.

We always kept her water bowl nearby the fetch field. Worried we would stop playing if she paused for a drink, she dropped the ball in the water bowl, drank around it, and then brought the freshly soaked ball to our feet for the next toss. If she had an itch, she would drop the ball to the ground and roll over it as a back scratcher, never once losing contact with it lest we get the wrong idea. If there were 5 tennis balls scattered in the yard, she would sniff each one until she found the right one, and then bring that one to us – refusing to chase the others. We think she took turns with the balls the way she took turns with the throwers. A lot to keep track of without a spreadsheet. Whenever we tried to stop the game, she would bark at the ball until we acquiesced to just one more toss, and then another. Finally, we had to teach her code words for ending the game, much like giving a child a 5-minute warning before ending a playdate or a favorite TV show.  When Lizzy learned to associate “last one, all done” with the end of the game, she left our final toss wherever it landed in the park and walked slowly back to the car, head hung low.

The city dog catcher regularly patrols our parks for off-leash dogs whose owners receive expensive citations. But as Lizzy grew bigger, faster, and stronger, our backyard could no longer contain fetch, nor could we throw the ball far enough to give her the exercise and entertainment to which she’d become accustomed. We used “flingers” which could launch a tennis ball 50 yards or more, and sought out deserted school playgrounds or obscure city parks. Still, we were busted several times for having her off leash. The most memorable was the time the dog catcher snuck up on my wife flinging the ball on a high school football field. Lizzy immediately recognized a new player had entered the game, and brought the ball back to the feet of the dog catcher. Barking at the ball with all her might, the dog catcher looked at my wife quizzically. She explained that Lizzy wanted him to throw the ball. He smiled, threw the ball, and let my wife off with a warning.

Almost a year ago, Lizzy changed. She completely stopped barking, listed to the left when she walked, and paced anxiously around the house. Most tellingly, she stopped playing fetch. We held on, trying to assess whether she was still happy. She ate well and still begged for treats, but without fetch, we had few other markers of happiness. Finally, it became obvious, as everyone said it would.

Our kids are all adults now. They raised Lizzy and Lizzy raised them. They each had a chance to say goodbye to her the week before she died. We think she still recognized everyone, but the gleam in her eyes had long passed.

In her last moments, we held her close and whispered to her that tennis balls fly farther in heaven. 2 thoughts on “THE QUEEN OF FETCH”