THE BLESSINGS OF BEING ADULT CHILDREN – IN MEMORY OF OUR MOMS

Posted on May 9, 2021 by Harley Rotbart
It’s been nearly three years since my wife and I both lost our moms, exactly 7 weeks apart. Those were very sad days and the memories of our final months and years with our moms are powerful ones, never more so than on Mother’s Day.
So…
FOR OUR MOMS, ON THIS MOTHER’S DAY, AN EXCERPT FROM “NO REGRETS LIVING – 7 Keys to a Life of Wonder and Contentment” ABOUT THE BLESSINGS OF HAVING BEEN YOUR ADULT CHILDREN
My father’s death nearly forty years ago, after thirteen months of illness, had a profound impact on me, on my belief system, and on my evolution in thinking about No Regrets Living. But the impact of his death on my mom was even greater, leaving her a widow in her early fifties. When her father, my grandfather became a widower with my grandmother’s death eight years later, my mom was in her early sixties. That’s when she became my eighty-five-year-old grandfather’s caregiver, chauffeur, and companion. I watched that relationship and learned from it. It wasn’t easy for either of them. My mom was too young to live the lifestyle of an eighty-five-year-old, and my grandfather, stripped of his driving privileges (by us), hated being dependent. Yet he was. They spent so much time together and attended so many community events together, those who didn’t know them assumed they were a couple. Healthy or not, that’s how many European families handled aging.
My grandfather was physically and mentally strong enough to live in his own apartment until he fell and broke his hip at age one hundred, but the apartment was across the hall from my mom’s and he spent most of his days in her place or joining her on her errands and outings. He prepared his own breakfasts, but lunches and dinners were across the hall at Mom’s.
After my grandfather’s death at 101, my mom remained independent for another ten years. We lived less than a mile from her and saw her often, but she drove, had social events with girlfriends, shopped on her own, kept her checkbook and credit card records, and was proud of all of it. Inevitably, though, time took its toll. As she entered her upper eighties, first her physical and then her mental faculties deteriorated, and as she declined, my responsibilities as a son dramatically increased. On her ninetieth birthday, as we gathered around her for cake and ice cream, she commented that she couldn’t believe she was already eighty. We didn’t correct her.
Committed to fulfilling her wish to stay in her apartment of more than twenty years, Sara and I joked (without laughing) that we had put my mom in assisted living, but we were the assistants. From there it rapidly progressed to the even less funny joke that we had put Mom in a nursing home, but we were the nurses, again in her own apartment.
In an eerily parallel and almost simultaneous sequence of events, Sara’s mom’s Parkinson’s disease accelerated, resulting in her physical and mental decline. Thankfully Sara’s dad was well and able to provide much of my mother-in-law’s care, but Sara still had a huge load with her mom—who lived less than a mile from us in the opposite direction from my mom. We were, truly, the sandwich generation, smack dab in the middle of our parents’ homes and needs.
The choreography of coordinating our moms’ care is a story known to many adult children caring for elderly parents. But it’s an important part of “No Regrets Living” for those finding themselves in the caregiver role. When your parents are gone, what will you feel about your role in their declining years? Contentment or regrets?
My mom and I had come full circle, now with me doing for her in old age as she had done for me as a young child. The most powerful epiphany of what her life, and mine, had become came when I was wheeling her home from synagogue services one Saturday morning and a man I recognized from the community, but didn’t know well, came jogging after us. “Hi, I’m Dr. F, and I was watching you take care of your mom. I once took care of your grandfather in the hospital and saw how beautifully your mom took care of him. You are her reward for everything she did for her dad.”
I still choke up when I think of that exchange. Whenever I see that physician now that my mom has died, I am reminded of how grateful I am to him for noticing and for reminding me that what I was doing for my mom was part of a legacy of family love. I’m also grateful to him because my mom heard, really heard what he said about her care for her father. Like many elderly parents, she desperately wanted to not be a burden. She often resisted our trying to take her places, help her with housekeeping and cooking, and, most of all, help financially. But by Dr. F reminding her of how thoroughly committed she was to caring for her father, she was jolted into seeing herself in the cycle of life, now in need of help rather than being able to provide it for another. That was a reminder we tried to give her often, but it meant much more coming from someone on the outside who had seen her in action.
Caring for our mothers became the hardest task Sara and I have ever had to perform, but, just as my mom’s devotion to her elderly father left her with no regrets about not doing more for him during his life, we think Dr. F helped her understand that we wanted to feel the same. Now that both our moms have died, we are grateful that we do feel that way.
HAPPY MOTHER’S DAY TO OUR MOMS, WE LOVE YOU AND WE MISS YOU VERY MUCH! 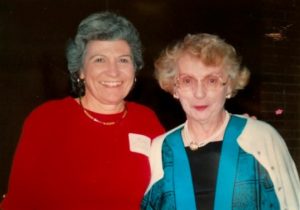