AN EXCERPT FROM “NO REGRETS LIVING” ABOUT HONESTY, KINDNESS, AND MY BELOVED “ZADIE.”

Posted on March 19, 2021 by Harley Rotbart
Zadie, my grandfather, always paid his bills in cash; he never had a checking account or credit card. When he went to the supermarket, he safety-pinned his “billfold” into the “bosom pocket” of his coat and took it out when it was time to pay. After getting change, he pinned the billfold back and left the store. On one shopping trip, the billfold contained much more cash than he needed for groceries because he had just come from the bank where he withdrew an entire month’s worth of cash, $600, to pay his monthly bills: heat, electricity, phone, insurance. When he arrived home, the billfold with all the cash was gone and an open safety pin dangled from his pocket. He was devastated—an entire month’s worth of cash, gone.
He cried and cried: money was scarce, and, for a small-village European immigrant living in a big American city where even normal daily life often felt overwhelming, this loss elevated his sense of insecurity and paranoia.
And then, two days later, the call came. From a man who found Zadie’s billfold in the parking lot, reported it to the grocery store manager, whom my grandfather had been calling nearly hourly. The store manager gave the finder Zadie’s phone number and the Good Samaritan returned the billfold with every dollar still inside.
My grandfather was now crying tears of joy, so grateful to this kind stranger that he offered him anything: a reward, a home-cooked meal for his family, a gift for his children. The man declined everything—he said it was just the right thing to do, and it made him feel good to have made someone else so happy. The Good Samaritan said he was getting up in years and more than ever tried to do the right thing. Zadie asked how old he was, and, when he heard, my grandfather replied “I’m old enough to be your father! And your father would be very proud of you, and so am I.” That Good Samaritan is my poster child for “No Regrets Living.” How fulfilled and rewarded he must have felt the night he returned the money to my grandfather—contentment worth far more than $600.
Not long ago I was walking out of a supermarket and found two twenty-dollar bills lying on the sidewalk. I picked them up, and then stood in that spot for ten minutes waiting for someone to come running back from the parking lot, or from inside the store, to find their lost cash. No one came. Of course, I immediately thought back to my grandfather’s experience with far more cash, but this was the same general idea in the same general venue. I left a note at the manager’s desk with my phone number in the event anyone called to ask about their missing money. I left another note with the security guard standing in front of the store and asked him to pass it along to the next shift. I never heard from anyone about the money, so we donated it to charity, in Zadie’s memory. 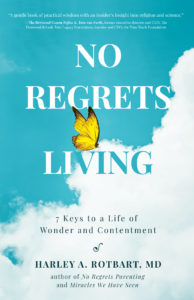